A short trek to view Everest from distance.

Everest Panorama Trek is the short escape to the base of the world's highest mountain.

Everest Panorama Trek is one of the shortest treks in the Everest region of Nepal. This trek is ideal for those enthusiastic time-bound travellers who are bound by time. Above all, it is an excellent choice to witness some of the mountain ranges of the Everest region including the highest peak in the world Mt. Everest within a short period. Besides that, Thamserku, Kangten, Nuptse, Kusum Kangaru etc can also be seen during the trek.

Experience the gift of Nature in the Khumbu valley of Nepal in a short duration. Similarly, you will also get to experience the tradition, culture, and warm hospitality of the Sherpas living in this region. The highest point of our Everest Panorama Trek is 3,867 meters above sea level. Because of that, it can be done by almost all age groups with no hiking experience. You will get to enjoy the jaw-dropping views of the mountain ranges with fewer trekking days.

Besides that, you can also add an optional day at Kathmandu to explore some of the UNESCO world heritage sites inside Kathmandu valley. You can also use this day as your last-minute shopping before your trek in the Everest region. If you are willing to explore the Kathmandu Valley then you will get to visit some of the heritage sites such as Swayambhunath, Boudhanath, and Kathmandu Durbar Square. Similarly, you can also use your last day of Everest Panorama Trek to explore Bhaktapur Durbar Square and spend the Night at Nagarkot.

Why Travel With Altitide Himalayas

Walking through the evergreen pine forest and viewing the Jaw-dropping views of the high peaks is one of the main highlights of Everest Panorama Trek. Being one of the shortest and the easiest treks in the Everest region of Nepal it can be done by all age groups. Similarly, no hiking experience is required to complete this trek. Above all, our experienced trekking guide will always be by your side throughout the trek. Our guide will make sure of your comfort, safety, and security.

Lukla is one of the most popular places in the Khumbu region of Nepal. Situated at an elevation of 2,860 meters above sea level. The meaning of Lukla places with many goats and sheep. The most dangerous airport in the world, Tenzing Hillary Airport is situated at Lukla. Once a tiny farming village, Lukla has grown a lot in the recent few decades. As of recently, you can observe many hotels and restaurants here.

Namche Bazaar is probably the most popular place in Solukhumbu. Situated at an elevation of 3,440 meters above sea level. Similarly, it lies on the slope of an arch-shaped mountain. Also known as the main trading hub for the Khumbu region, Namche Bazaar was once a trading hub. There are various hotels, restaurants, and equipment stores around Namche Bazaar. Although situated at such a high altitude, regular pubs and cyber cafes are also available here. Kongde Ri 6,187 lies in the west, as well as the Thamserku, which is in the south of Namche Bazaar.

Khumjung village lies in the Khumbu Pasang Lhamu rural municipality of Solukhumbu district. This marvelous village is also one of the largest villages in the Khumbu region. Meet the charming local people and experience the warmth of the Sherpa culture during your stay at Khumjung. Khumjung village sits on the laps of Mount Khumbila and you can also observe the mountains from different angles.

Unlike other villages at higher places, this village has modern communication facilities such as phones and the Internet.  Khumjung School is also situated in this village which was built by Sir Edmund Hilary’s Himalayan Trust in 1961. You can also explore the Khumjung Monastery in your spare time. The Scalp of Yeti is still preserved in the Khumjung Monastery and you can have a glance at it after donating a few amounts to the Monastery.

Also known by the name Dawa Choling Gompa, Tengboche Monastery lies at an elevation of 3,867 meters above sea level. It is the largest Gompa in the Khumbu region. Meanwhile, Lama Guru built this Monastery in 1916. But inside the monastery, you can witness some of the rare and centuries-old inscriptions inside the monastery.

Tengboche Monastery is located at the hilltop at the confluence of Dudh Koshi and Imja Koshi. Mani Rimdu Festival of Sherpas is one of the most significant festivals celebrated at this monastery. This festival falls during the months of October to November and lasts for 19 days.

The highest point of the Everest Panorama Trek is 3,867 meters above sea level. Because of that, it can be explored almost throughout the year. But during the winter season of the year during the months of December to the first week of February, the chances of snowfall are high. Because of that, it is better to avoid these two months of the year. Similarly, during the monsoon season of the year, the trek route is slippery and due to the excess rain in the lower region the flight to Lukla may be delayed and you may not get the scenic view.

The best months to go on an Everest Panorama Trek are October and November. If you visit the Tengboche Monastery during these months of the year then you may experience the Mani Rimdu festival. It is one of the most significant festivals of the Sherpas living in the Khumbu region. Another Best Time for Everest Panorama Trek is during the months of March and May. The sky is clear and jaw-dropping views of the mountain ranges can be seen. The chances of rainfall are also very less during these months of the year. Above all, You will witness the beautiful rhododendron flower blooming all over the trails in the lower part.

Your Arrival Time (?) Our office representative will meet and greet you at Kathmandu Airport and transfer you to your hotel in Kathmandu. At 06:00 PM: In the evening we will meet for a coffee and will brief you on the details of your trek program.

Fly to Lukla, Trek to Toktok

At 07:00 AM: you will have your breakfast at the hotel and check out from the hotel. Your Trek guide will be waiting for you. After that, you will take a ride to Tribhuvan International Airport and fly to Lukla. Upon reaching Lukla you will meet other members for your trek. After that, you will start walking towards Toktok. You will walk uphill to reach this beautiful village passing through Chhuthawa and Phakding.

Transportation Flight from Kathmandu to Lukla

At 07:00 AM: Breakfast at the hotel and you will head towards the next destination of the day. During this day you will walk slowly towards the Namche Bazaar. It is one of the most popular Sherpa villages in the Khumbu region. It will take about 5 to 6 hours of walking to reach Namche Bazaar.

At 05:00 AM: Wake up early to get the jaw-dropping view of Mount Everest from the Everest View Point. It will take about 30 minutes to reach the viewpoint of your hotel. After witnessing the marvellous view you will return back to the hotel. After having breakfast you will slowly move towards Khumjung. The walk to Khumjung is tougher than that of day 3 and you will pass through green lush forest and authentic sherpa villages before reaching. Meanwhile, marvellous views of the gigantic mountain ranges can also be seen upon reaching Khunde.

At 05:00 AM: Khumjung village is one of the largest villages of the Khumbu region and it lies in the shadows of Mount Khumbila. You can enjoy the wifi facility here but an extra charge is required. After breakfast, you will move towards Tengboche. Tengboche lies at an elevation of 3,860 meters above sea level. Tengboche Monastery is one of the must-visit places during your stay at Tengboche.

At 07:00 AM: After breakfast, you will move towards Phakding. During the day you will gradually lose altitude and finally reach Phakding situated at an elevation of 2,610 meters above sea level. Marvellous views of the mountain ranges can be seen during your walk to Phakding.

At 07:00 AM: After breakfast, you will move towards Lukla. It is one of the most popular places in the Khumbu region of Nepal. The hike to Lukla is easy and you can have free time to roam around and interact with the locals or other visitors.

Fly back to Kathmandu

At 07:00 AM: Breakfast at the hotel and you will take a flight back to Kathmandu. You will then be transferred to the hotel. You will have enough free time for shopping or to roam around Kathmandu Valley. You can also choose for the Kathmandu Sightseeing Tour during this day. At the end of the day, we will have a farewell lunch together.

You will have your breakfast at the hotel and then you will have free time. We will drop you at the Tribhuvan International Airport 3 hours before your flight. 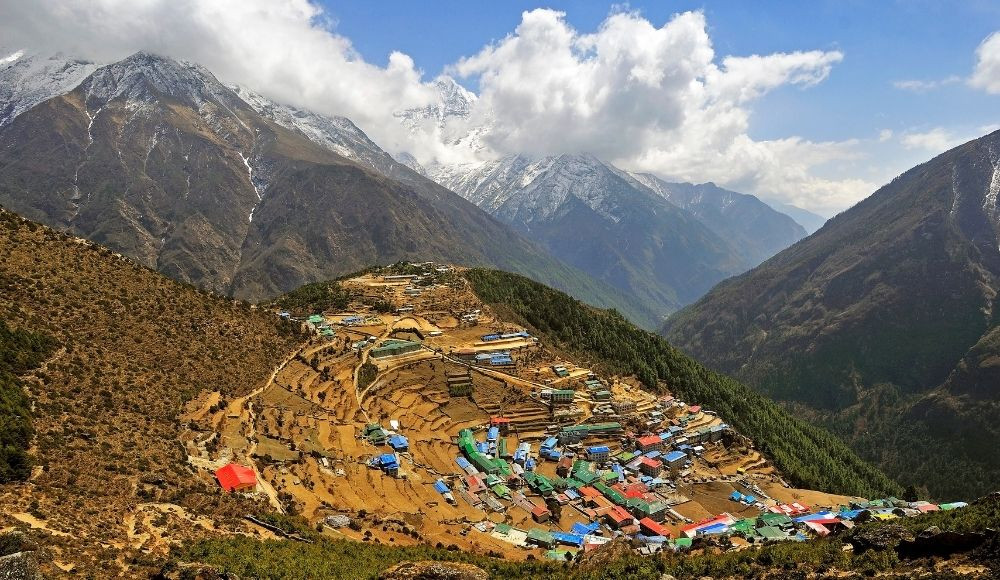 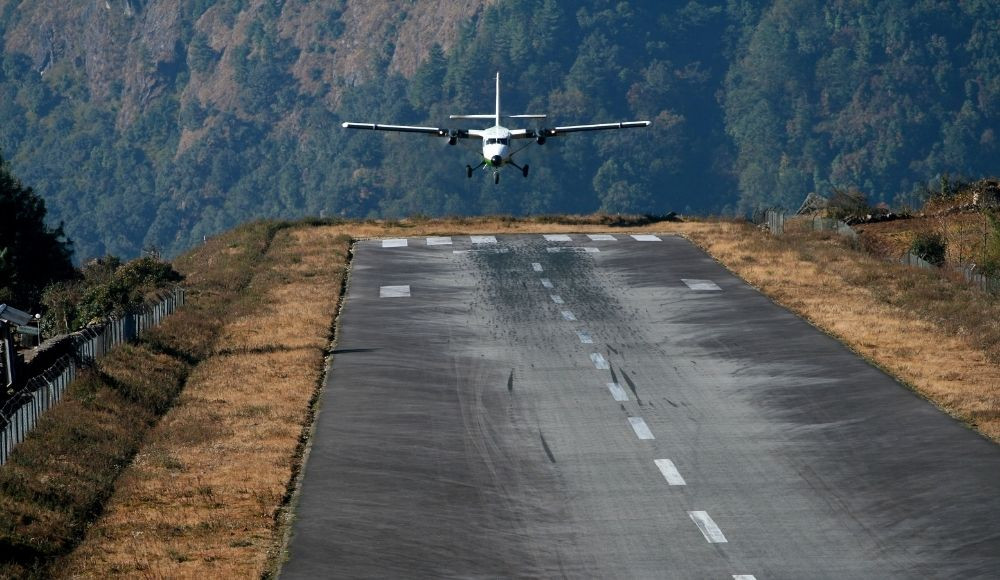 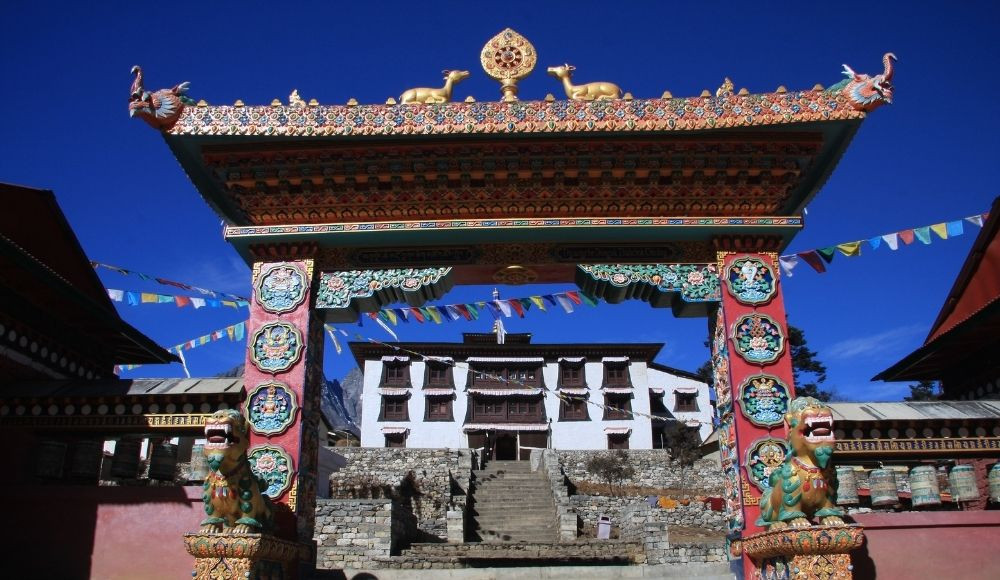