A best escaping place near Pokhara.

Ghandruk village of Nepal is one of the most popular villages of Nepal, that lies at an elevation of 2,012 meters above sea level. Suitable for all the age groups, our Pokhara to Ghandruk overnight tour package is an ideal choice to spend a day away from the hustle and bustle of the city. Besides that, it is also an amazing place to witness some of the marvellous views of the mountain ranges such as the Annapurna, Machhapuchhre and Hiuchuli.

Pokhara to Ghandruk overnight tour package is one of the ideal choices to skip your busy schedule and spend a weekend away from the hustle and bustle of the city. The warm hospitality of the local Gurungs are also the main highlights of the Ghandruk tour. Village tour, bird watching and Gurung museum tour are some of the popular activities of Ghandruk. Besides that you can also learn the culture and tradition of the Gurungs and also can wear the traditional Gurung dresses as well as the ornaments.

With lots of hotels and homestay available for the hikers, Ghandruk village can accommodate thousands of visitors at once. Most of the hikers visit this amazing village as the starting or the ending point of their trek such as the Khopra Danda Trek, Annapurna Sanctuary Trek, Annapurna Base Camp trek or the Ghorepani Poon Hill Trek. But there are a lot of other things to do during your stay at Ghandruk village.

Why Travel With Altitude Himalaya?

This Gurung village of Nepal is an ideal choice to learn the culture and traditions of the Gurung community. Beside that you can also visit the vintage Gurung museum that lies inside this village. Visitors are also seen enjoying while interacting with the locals or while wearing the traditional Gurung dress as well as the ornaments.

Ghandruk is one of the most popular villages of the Annapurna region as well as of Nepal. Popular for the Gurung culture and traditions it has become one of the most visited tourist destinations of Nepal. Besides that, the astonishing views of the mountain ranges that can be seen from the village are also the main highlights of this village. The most popular trek of the Annapurna region, Ghorepani Poon hill trek also starts from the Ghandruk village. Meanwhile the distance from Ghandruk to Ghorepani is 14 kilometers only.

Besides that, some other trek that can be done from Ghandruk village includes the Khopra danda trek, Mohare hill trek and the Annapurna Base Camp trek. Because of that during the trekking season in Nepal, this village is filled with the domestic as well as the international hikers. There are plenty of good hotels as well as the homestay available in the Ghandruk village. But the walk-in guest may not get any rooms during the peak season as thousands of hikers choose to stay overnight at Ghandruk village during that time of the year.

Located in the Gandaki province of Nepal, Ghandruk lies at an elevation of 2,012 meters above sea level. Ghandruk village of Nepal can also be reached through the drive from Pokhara. The distance from Pokhara to Ghandruk is 60 kilometers only. But most of the hikers moving towards the Annapurna base camp or the Ghorepani Poon hill choose to hike from Nayapul.

Meanwhile, the next day you will take a walk to reach Nayapul from Ghandruk village. You will follow the same route to reach Nayapul. However, it will take less time to trek from Ghandruk to Nayapul as most part of the trekking trail is an easy downhill walk. Upon reaching Nayapul you will take a drive back to Pokhara. You will drive through the same route to reach Pokhara through the Pokhara Baglung highway.

The walking distance from Nayapul to Ghandruk village is about 9 kilometers. After crossing the Modi Khola bridge the path to Tikhedhunga and Ghandruk village separates. Leaving the way to Tikhedhunga you will walk on the bank of Modi Khola to move towards Ghandruk. At the beginning of the hike you will take the motor-able road. During the hike you will pass through several villages and also can witness a few of the waterfalls.

Leaving the road you will walk through the stone steps after reaching Syauli Bazar. You can also witness the Landruk village across the Modi Khola in the opposite site. Besides that you can also witness the marvellous views of the Annapurna and the Machhapuchhre mountain during the hike. Upon reaching the Kimche village you will again walk through the motorable road for a few minutes. After that you will walk through the stone steps to reach the entrance gate of the Ghandruk village. You will follow the same route trek from Ghandruk to Nayapul.

Besides that no hiking experience is required to reach Ghandruk village from Nayapul. With an easy to moderate level of difficulty this hike can be done by all the age groups.

Ghandruk is one of those limited places of Nepal that can be visited almost throughout the year. The astonishing views of the mountains have never disappointed the hikers visiting Ghandruk village. But we highly recommend you to check the weather if you are visiting Ghandruk village to witness these mountain ranges. It is better to skip the monsoon season of the year as the weather of Ghandruk is unpredictable and you may not witness the high mountain ranges.

March, April and May are the best months of the year for the Pokhara to Ghandruk overnight tour. During these months of the year the weather is clear and you can witness the marvellous views of the mountain ranges. Besides that, you can also witness the beautiful rhododendron flower blooming all over the village.

Another best time to visit Ghandruk village is during the Autumn season of the year. During these months of the year the morning and the evening are chilly but the day is warm. Besides that there are very low chances of snowfall and you can also witness the marvelous views of the mountain ranges during these months of the year. Because of that, September, October and November are also regarded as the best time  for the Pokhara to Ghandruk overnight tour.

During the winter season of the year, there are high chances of snowfall. Because of that it is an ideal time to visit Ghandruk village for those who are willing to seek the snowfall at Ghandruk. December, January and February are the best months of the year to seek snowfall over the Gignac mountain ranges.

Drive to Nayapul, Hike to Ghandruk

At 08:00 AM: After breakfast, our office representative will pick you from your location near the lakeside. After that you will take a drive towards Nayapul. Besides that, you can also add paragliding during the day before moving towards Nayapu.

At 10:00 AM: Upon reaching Nayapul, you will start walking towards Nayapul. The walking distance from Nayapul to Ghandruk village is only 9 kilometers. Meanwhile, it will take about 5 hours to reach the entrance gate of the village. Upon reaching there you will get refreshment time and can explore the Gurung museum.

Hike to Nayapul, Drive to Pokhara

At 06:00 AM: wake up early to witness the amazing sunrise view over the Annapurna, Machhapuchhre and the Hiuchuli from your bedroom window.

At 08:00 AM: Breakfast at the hotel and you can take a village tour. Besides that you can also wear the traditional Gurung dress and ornaments and capture memories.

At 11:00 AM: Have your lunch at the hotel and you will pack your bag and move toward Nayapul. A private vehicle will be waiting for you in the Pokhara to Baglung highway. Upon reaching there you will move towards Pokhara.

Find every single detail about Ghandruk village and overnight tour package from Pokhara, feel free to contact us for any kind of support. 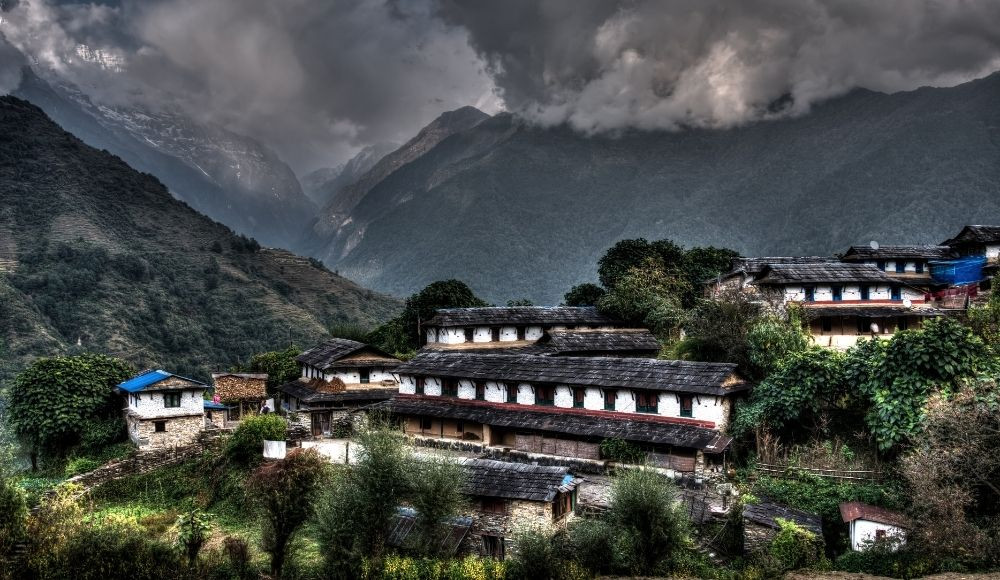 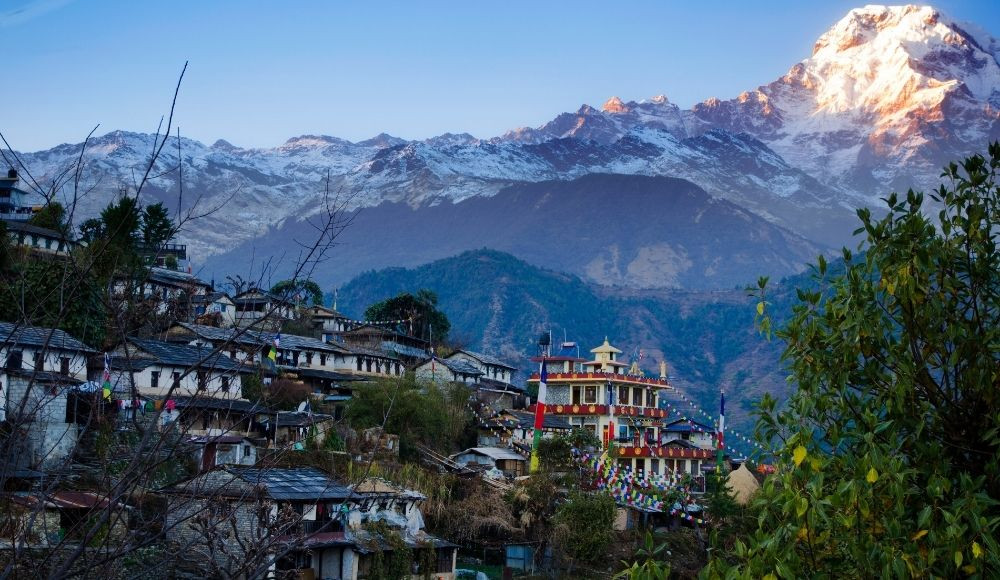 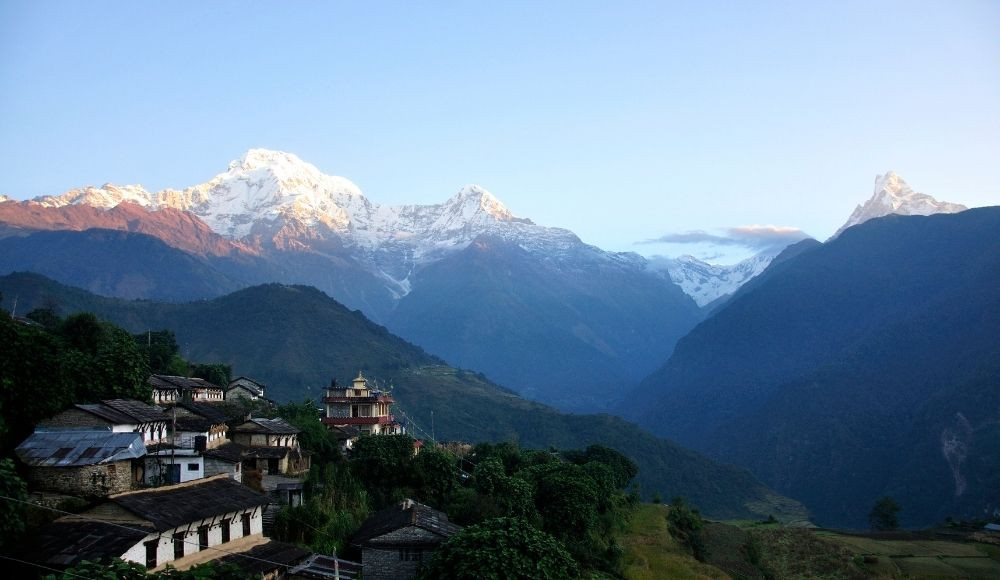 2 Days from
US$ 130 pp
Request a Quote Book Now
Share With Your Friends: