A lifelong opportunity to explore Everest base camp from Tibet.

Lhasa Everest base camp tour is the Classic tour itinerary to visit Lhasa and Everest Base Camp through Tibet.

Lhasa Everest base camp tour is the Classic tour itinerary to visit Lhasa and Everest Base Camp through Tibet. If you are not used to the high altitude, then this is one of the best itineraries. This 8 days Lhasa tour covers all the Lhasa’s main tourist sites like Potala Palace, Jokhang Temple, Barkhor street. It also covers the major attractions like Drepung and sera monastery along with Gyantse Kumbum and Shigatse Tashilhunpo monastery.

Why Travel With Altitude Himalaya?

Meals As mentioned in the itinerary

Because of its easy accessibility, Lhasa Everest Base Camp tour is gaining a lot of popularity in recent years. Suitable for all the age group of people it is an ideal choice for those who are willing to skip the demanding hike. Meanwhile, it lies at a higher altitude because of that there are high chances of getting altitude sickness.

You can see a lot of natural scenery like the beautiful sacred Lake Yamdrok Tso and Karo Glacier. You gain a beautiful experience with beautiful views of Mt. Everest, the highest mountain in the world from the Everest Base Camp. You will experience urban China. The beautiful landscapes, traditional villages and local people make your journey worth one. We can customize this trip on your choice and preference. Our guide will be there with you throughout the trip.

Lhasa To Everest Base Camp

The first day starts with your arrival in Lhasa. Our office representative will meet and greet you at Lhasa airport and transfer to the hotel. The second day, you visit for the Lhasa city sightseeing with Potala Palace and Jokhang temple. These two sites are the most popular places to visit in Lhasa. Meanwhile, they also carry the historical and cultural significance of Tibet

The third day, you explore the monasteries (Sera and Drepung) around Lhasa city. These two are the most popular monasteries of Lhasa as well as of Tibet. The fourth day you will drive towards Shigatse via Gantyse. During the drive you can also witness the Gampala pass situated at an elevation of 4,790 meters above sea level.

During the fifth day you can explore the Everest Base Camp of Tibetan side. Besides Everest, you can also witness some other mountain ranges. On the sixth day, you can visit for the sunrise and also can walk a short trek there. And later on, return back to Shigatse. On the Seventh day, you will get back to Lhasa. On the last day, we will farewell you from Tibet with lots of happy memories.

Potala palace used to be the winter palace of Dalai Lama from 1649 to 1959. But after that it was turned into a museum and made public. Meanwhile, The bodies of the Dalai Lama 5th to 13th are preserved in this palace. Built by the 5th Dalai Lama, it covers an area of 130,000 square meters. From the palaces roof and balcony you can witness the amazing views of the Lhasa city, valleys and and the mountain ranges in distance.

Situated at an elevation of 3,700 meters above sea level, this building is 117 meters tall and is the tallest building in all Tibet. There are altogether 1,000 rooms in this palace and it was listed under UNESCO world heritage site in 1994. After that huge numbers of tourists began to visit this palace. But only 2,300 visitors are allowed per day to protect the palace and visitors have an uncrowded tour of the palace.

The actual name of this temple is Resa and the meaning of Re is the ‘Goats’ and Sa means ‘Earth.’The name was given to show the graduation to the goats who carried all the materials used to build the temple. After the 15th century only the temple was named Jokhang Temple. It was built in the 7th century and took about 3 years to complete.

Its significance in the political structure of the past and culture of today may be found in any documentation of the temple and the city. Meanwhile, different architectural styles such as Han style, Tiberian style, Nepalese style and Indian style can be seen inside this temple. Jokhang Temple is the spiritual center of Tibet and the holiest place of destination for Tibetan Buddhist pilgrims.

Situated about 8 kilometers away from the downtown, it is one of the significant monasteries of Tibet. Built in 1416 it is the largest temple of the world. Besides that, it is also one of the three greatest temples of Tibet. It was founded by Jamyang Chojey, Meanwhile it was extended by the 5th Dalai Lama.

The entrance fee of Drepung monastery is RMB 50. Similarly, the opening hour of this monastery is from 09:00 to 17:00. Besides that, it is also the Most important temple of the Gelug Sect of Buddhism. The meaning of Drepung is the temple of collection in Tibetian language.

The hill behind the monastery was filled with wild rose which is called by the name Sera in Tibetian because of that this monastery got its name Sera. It is also one of the greatest seats of learning in the Mahayana Buddhist Tradition and it takes a minimum 2 hours to explore around this monastery.

Situated at an elevation of 5,190 meters above sea level, it is the ideal choice to have a close view of the highest peak in the world without any demanding trek. Also known by the name North Everest Base Camp, it was opened for visitors in the 1990s. located in the Gamagou of Qudang Township, Shigatse it is the easiest way to reach the base camp of the highest peak in the world.

The full name in Tibetian is “all fortune and happiness gathered here” or “heap of glory”. Founded by the first Dalai lama in 1447 it was financed by donation of the local nobles at that time. Situated about 3,500 meters above sea level it will take about a 5-minute drive from central Shigatse. With an area of 150,000 square meters it is one of the six biggest monasteries of Gelugpa.

After arriving in Lhasa, a local tour guide will welcome you at the airport/train station, then transfer the guests to the hotel. Acclimatize the high altitude in the hotel.

During your second day in Tibet, you will be visiting Lhasa city. Here at Lhasa city you will get to visit Jokhang Temple and Potala Palace. Both of these places are excellent for the visitors and you can also learn the tradition, culture and history of Tibet.

Drive from Lhasa to Gyantse. Admire the Gampala pass (4790 m) on the way, and get a glimpse of Yamdrok-Tso (4400m), surrounded by many snow-capped mountains. Then continue to drive west towards Gyantse. In Gyantse, tourists visit the famous Pelkor Monastery and Gyantse Kumbum. After one and a half hour’s drive, clients arrive in Shigatse, the second-largest city in Tibet.

Drive to Everest Base Camp

Drive to Lhatse where tourists can take lunch. Afterwards, drive to Shegar. If the weather is clear enough, tourists can view Mt. Everest in the distance on the way back down. After 4 to 6 hours, arrive at Rongbuk monastery. On the way there, clients will pass Pang la Pass, one of the highest passes in Tibet at 5050m. You can enjoy the view of all the five highest peaks in the world.

In the morning, you can see the sunrise appear on the top of Mt. Everest, and have a full view of the magnificent Mt. Everest. You can either trek 4 kilometres from your tent to the  Everest Base Camp or go there by local bus. Then drive back to Shigatse.

On the seventh day, explore Tashilhunpo monastery of Gelug Sect, the seat of the Panchen Lama. It was built in 1447. The monastery houses a giant statue of the Maitreya Buddha (Buddha of the future) in the world. It also includes a tomb of the Panchen Lama, containing jewels and gold.

In the afternoon, you will drive back to Lhasa, which takes around 6 hours.

Transfer clients to the airport or train station. 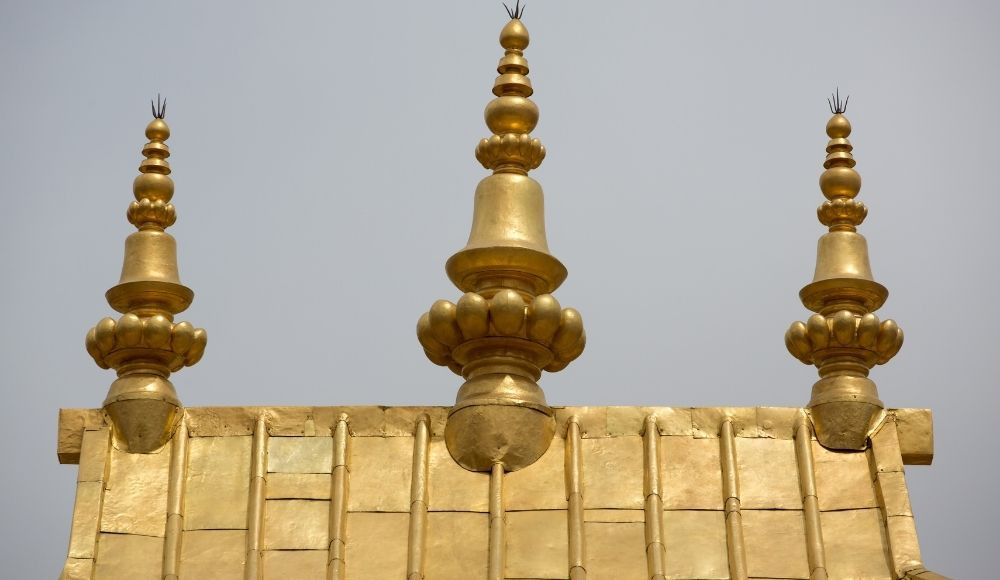 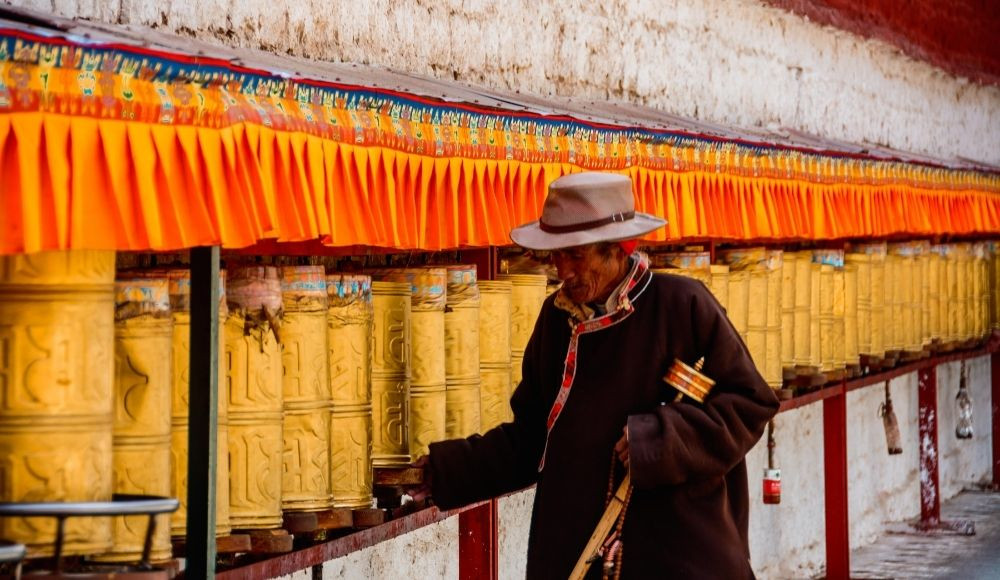 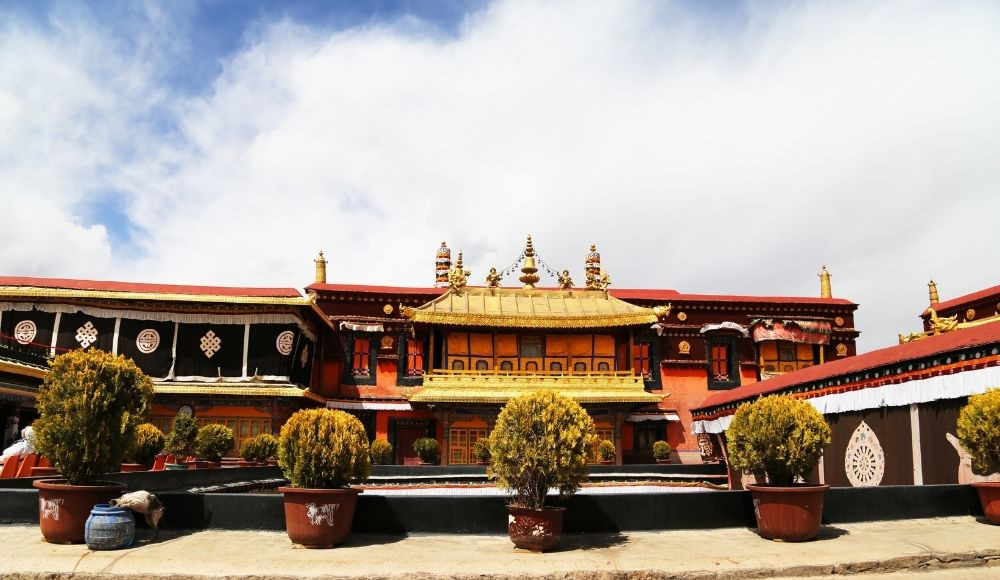 8 Days from
US$ 1550 pp
Request a Quote Book Now
Share With Your Friends: